It’s been about 4 years since I’ve been to Yosemite National Park and stayed on the valley floor. This past weekend was beautiful and not too crowded, but still above average in attendance. A few things have changed since my last visit including the change in access to Yosemite Falls and the addition of hybrid bus lines. All in all the atmosphere was nice, but still a little more crowded than I would prefer. I think Yosemite still suffers from too much love. The amount of visitors definitely takes a toll on the park and the wildlife found with in.

This weekend rather than focus on my photography I played host to my sister and her family (nephew 1 1/2 yo and neice 4 yo). This was their first visit to Yosemite so my focus was more family oriented rather than photography oriented. That being said I still couldn’t resist getting up at 4am to get in some photos for myself before spending the rest of the weekend taking some family photos for fun.

An example of too much love taking its toll at Yosemite National Park:
Hikers scaling Half Dome during the summer of 2001. 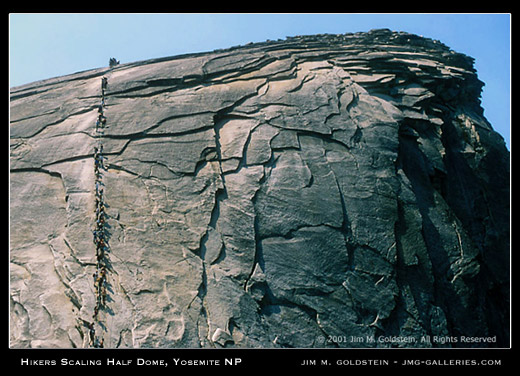