It’s official I’m back from my trip to Maui. The weather was rather stormy making landscape work challenging, but it was a peak season for Humpback whales sightings. Approximately 10,000 whales were congregating between Maui, Lanai and Moloka’i. The whales are the star attraction this time of year and have become the focus of a lot of ecotourism activities. Locally a great balance has been struck between man and whale, but on a national level this isn’t quite the case. 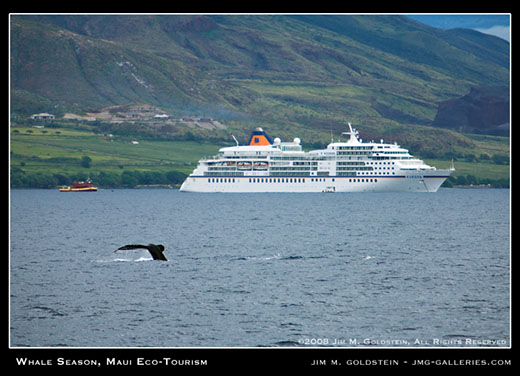 An on going battle has been raging between the current administration and environmentalists to keep high powered sonar from being used by the US Navy. Back in January President Bush decreed that the Navy was exempt from environmental laws restricting the use of high powered sonar. In the middle of my trip a federal judge ruled that President Bush overstepped his authority and the US Navy is indeed subject to environmental laws.Â  The ruling specifically dealt with no-sonar zones closer to home in Southern California, but set an important precedent impacting whales in Hawaii and ultimately worldwide. Not to be too graphic, but the sonar used by the Navy in these exercises is so powerful it can create sound strong enough to circle the globe and cause internal organs of sea mammals to hemorrhage. Lets hope this ruling is final and isn’t escalated further.