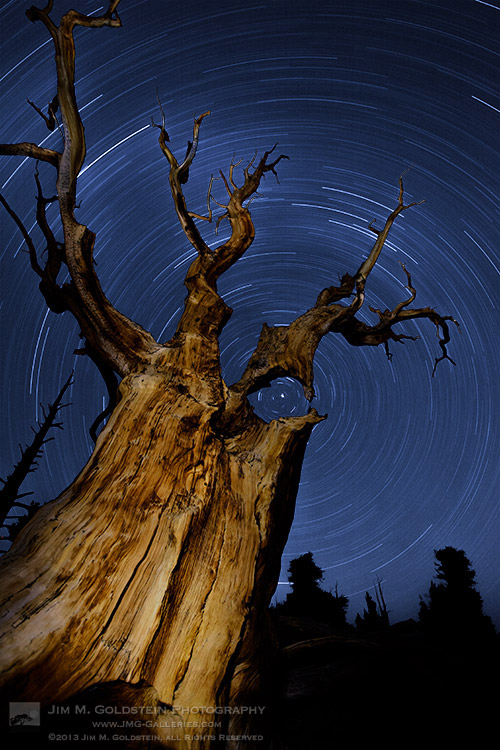 Atop the White Mountains, along the eastern border of California, lies the Ancient Bristlecone Pine Forest. This area is known as the home of the worlds oldest trees including the oldest tree, Methuselah, whose age is 4,750 years.  The last time I took the time to visit this remote area I was a dedicated film shooter. On a recent visit I took advantage of the latest DSLR technology to photograph astro-landscapes while still using old film techniques, namely conducting single long exposures (not multiple image stacking). Cold weather on the order of 10-20 degrees Fahrenheit aided in keeping my camera sensor cold enough to avoid any amplifier glow or amp glow, noise caused by the circuitry heating up under extended exposures). Interestingly I found out that for similar long exposures the Canon 5D Mark II did better than the Canon 5D Mark III. The Canon 5D Mark III suffered notable amp glow while the 5D Mark II had none. Results I found quite surprising.

About the Author
Jim Goldstein is a professional photographer and author, based out of the San Francisco bay area in California, who specializes in outdoor and nature photography. Passionate about nature and the environment Jim infuses elements of the natural world into his commercial, editorial and fine art work. For more follow Jim on Google+ | Twitter | Facebook | Instagram | Subscribe
Social Share
6 Comments
Copyright © JMG-Galleries – Jim M. Goldstein Photography, All Rights Reserved