Photographer’s Rights: Know Them When In The Field

This weekend, while on my way to the San Juan Islands with friends, I had a predictable run in with security while photographing a refinery in Washington state. Post-9/11 it’s pretty well known that as a photographer you’re likely to be harassed by “security” when photographing certain subjects such as refineries, bridges, airports, etc. Mind you during this incident we were on public property and hardly looked menacing. Three white yuppies with expensive looking cameras and tripods pointing up towards a smoke stack about 300 yards from the refinery’s main gate. 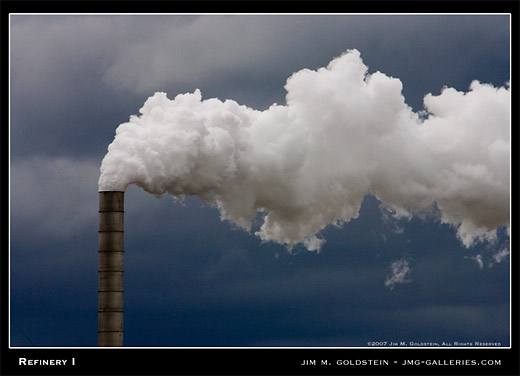 With in 5-10 minutes a security truck pulled up with a lone security guard asking what we were doing. Clearly we were taking photos, but I didn’t have a chance to spout off that remark. Before I could, the question that surprised us and pissed us off the most was, “Can I see your ID please?” Mind you this was asked while the security guard noted the cars license plate number and began circling our vehicle.

So why did we get so aggravated? Clearly the security guard is just doing his job. I’ve been told on my travels, thanks to airport security / TSA, that the security level is now orange. The constant reminder of a “High Risk of Terrorist Attacks” has been ample reason to justify a variety of changes in how and what we must do to travel. The reason for the aggravation is that increasingly in the name of security photographers are harassed and pressed in ways that increasingly prey on the uninformed… all for doing their job or the pursuit of their hobby. I’m not sure I can think of another profession or hobby that endures the same level of scrutiny and harassment.

Most frustrating is that those harassing photographers in the name of security are often rude, act like bullies, are trained to intimidate photographers into providing information that is illegal to demand and have an unchecked ability to exploit security paranoia to bring authorities into the mix for completely legal activity. 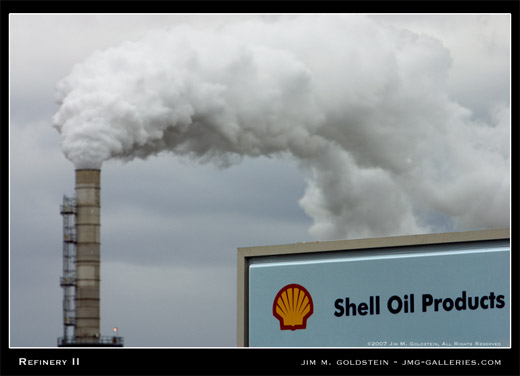 In this case there was no escalation of conflict. We knew our rights and we refused to provide our ID. Why would we possibly offer that up? We were on public land, photographing a structure clearly seen from afar and confronted for ID by someone that was not authorized to. As before with my article on Copyright protection a photographer must educate themselves to the law. As it stands the law still protects the rights of photographers, but only so far as a photographer’s knowledge of those protections.

By the time we were approached we had nearly completed our spontaneous shoot of a very interesting smoke stack. Out of principle we didn’t stick around photographing the refinery as we had a ferry to catch. We did swing by for a second shoot on our way back and we saw our “friend” the security guard again. This time only in passing as we were heading in opposite directions and randomly stopping to photograph a gigantic group of herons on the surrounding mud flats along with another perspective of the very photogenic refinery smoke stacks.

With all that being said… learn your rights, be professional and get your shot.

No Photography – No Common Sense! – An entertaining rant by Jeff Schwartz on posted signs “No Photography” in New York city and Washington D.C.