Morning Sunlight & Fog – Between You, Me and the Trees

Early Wednesday morning I was on dog duty walking my 3 dogs around a local park. When I left the house the neighborhood was shrouded in thick fog. Realizing that there may be a photo opportunity with the fog rolling through the Monterey Pine trees in the park, I went back in the house to get my camera and tripod. Murphy’s Law would have it that as soon as I got to the park the fog started to lift, but just enough to increase visibility. The fog wasn’t thick enough for the moody shot I wanted nor was it light enough to get a good nature profile photo of the trees. The fog seemed to ebb in density. I got a couple shots, but wasn’t really satisfied and just kept walking the dogs around the park. Sticking around and having patience paid off as for 30-45 seconds the sun broke through the fog revealing the scene pictured below. As quickly as the sun broke through it was concealed again in the fog turning the park from a golden jewel to a gray shadow of itself. I suppose if there was a moral to the story its to know your subject, be patient and to always be prepared. 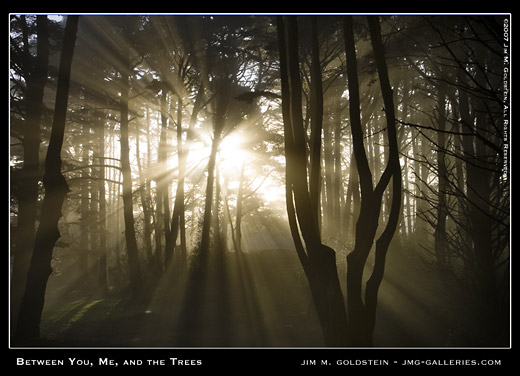