How Every Flickr Photo Ended Up on Sale This Weekend

There have been many stories over the past few years about copyright infringement on Flickr. To date most have been about individuals maliciously downloading the work of others to resell it as their own or companies using photographs commercially violating either the licensing restrictions of the photo or ignoring the need for a model release. What most remain unaware of is that Flickr fosters copyright infringement through their API. The most egregious part of this is that Flickr knows it. Even if done with out malice you can expect them to spin it that they do not foster copyright infringement through their API or, as you’ll later see, that they’re immune from being liable for improper use of their API because of their API terms of use.

6 months ago I realized that two applications leveraging Flickr’s API were ignoring photo licensing settings that every user configures in the “Privacy & Permissions” section of their “Your Account” page.Â  Even now regardless of a photos designated licensing setting, whether Creative Commons or All Rights Reserved, these and other applications are publishing Flickr photos to 3rd party web sites and image files, high resolution if available, are being downloaded for reuse on personal computers. Worse still is that as recently as this weekend MyxerTones employed Flickr’s API inappropriately in effect making every Flickr photo available for sale as cell phone wallpaper for 2 days.

My first realization that there was a problem with how Flickr’s API was being managed was when I found a medium size version of my photo “Penny Harvest Rockefeller Center, New York” displayed on CoinNews.net in late December 2007 just after Christmas. I wrote the administrator of CoinNews.net immediately and found out that they were unaware of the copyright infringement. It was explained to me that they were just using a freely available plugin that enabled them to publish the photographic work of others from Flickr via specified tags. The blog plugin they were using, “FlickrRSS“, was pulling the most recent photos tagged with “penny harvest” whether designated as “All Rights Reserved” or not. 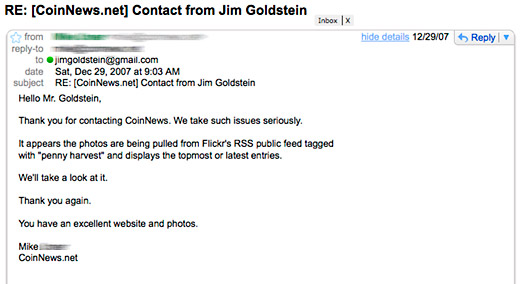 With in days of this discovery Dave Winer announced FlickrFan. FlickrFan creates a high resolution photo screensaver based on a user or a tag based Flickr RSS feed. Photos from the specified user(s) or tag(s) are downloaded from Flickr to a local computer without sensitivity to the copyright license chosen by the photographer. (See FlickrFan: A Heads-Up For License Conscious Flickr Photographers). I contacted Dave about this, but strangely he would only carry on a conversation through blog comments. He in essence refused my invitation to talk about how his application worked over the phone or via email. His comments created more questions than they answered. In the end it left me scratching my head as to who the responsible party is in such application development. Is Dave immune because he’s leveraging RSS feeds that pulls content in a set format determined by Flickr or is Dave responsible for constructing an application that properly factors in photo licensing information contained with in Flickr’s feeds and/or API?

To pursue the matter further I contacted Flickr in December via an email to their support team. My email went unanswered. 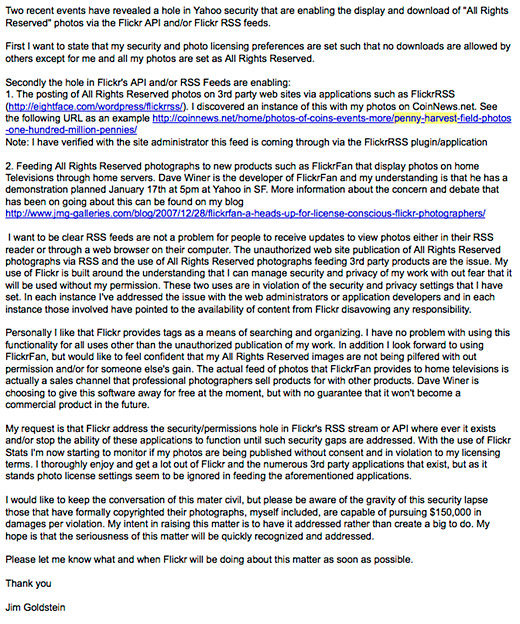 In early January I had the good fortune of taking part in a panel discussion, Media Web Meet Up III: The Producers, with Heather Champ who is the Community Manager at Flickr. I took the opportunity to let her know about this problem with either the Flickr API or how the API was being enforced. I was told that she’d get back to me as soon as possible. After a few polite email exchanges that spanned several months I never heard anything more from Heather on the matter.

Then this weekend a Flickr contact (stargazer95050) let me know that my photo Out of the Gloom, which like all my photos has the “All Rights Reserved” license designation, was being sold as cell phone wall paper through MyxerTones.com. It turns out everyone’s Flickr photos were available for purchase through MyxerTones.com from July 3rd to July 5th, but Myxer disabled their Flickr integration after receiving numerous complaints.Â  Myk Willis of Myxer addressed the growing chorus of concerned Flickr photographers aware of their Flickr integration gone wrong this past Saturday apologizing and explaining the situation from his perspective.

This latest incident is by far the most egregious, as the use of photographs from Flickr were being sold with out the consent of a single photographer, all while photo licensing terms were programmatically ignored. I’m glad to see that Myxer took the proper steps to disable their Flickr integration, but this is the latest example of Flickr playing with fire. On some varying level it is easy to point the finger at Myxer, Dave Winer (author of FlickrFan), Eightface (the company behind FlickrRSS) or any other developer/company for improperly using the Flickr API, but I would argue that responsibility ultimately lies with Flickr.

Flickr controls their API and they control who uses their API. They issue API keys and supposedly monitor who they give these keys to whether companies like Myxer, independent software developers like Dave Winer or blog plugin developers like Eightface.Â  Flickr even goes so far as to provide Terms of Use for their API and the do their best to place responsibility of recognizing image licensing terms on the developers using the Flickr API.

Section 1a, sub-section ii
Comply with any requirements or restrictions imposed on usage of the photos by their respective owners. Remember, Flickr doesn’t own the images – Flickr users do. Although the Flickr APIs can be used to provide you with access to Flickr user photos, neither Flickr’s provision of the Flickr APIs to you nor your use of the Flickr APIs override the photo owners’ requirements and restrictions, which may include “all rights reserved” notices (attached to each photo by default when uploaded to Flickr), Creative Commons licenses or other terms and conditions that may be agreed upon between you and the owners. In ALL cases, you are solely responsible for making use of Flickr photos in compliance with the photo owners’ requirements or restrictions. If you use Flickr photos for a commercial purpose, the photos must be marked with a Creative Commons license that allows for such use, unless otherwise agreed upon between you and the owner. You can read more about this here: www.creativecommons.org or www.flickr.com/creativecommons.

Note the bold text “solely for the purpose for which such Content was submitted or made available”. This is a slippery slope for Flickr and Yahoo as I’m uploading photos on Flickr to share with friends and the Flickr community. No where have I authorized an all encompassing distribution of my photography to third parties. Don’t get me wrong I’m not saying Flickr should shut down their API. I employ services that use Flickr’s API all the time with out problem. I authorize Moo to print cards with my photos, I authorize that my Flickr feed be picked up by Twitter and I authorize the use of my web site photo gallery to pull photos from Flickr. In each of these examples I have authorized how my photography is used in line with my licensing terms “All Rights Reserved”.

In fact if you look at your Flickr Account page in the Privacy & Permissions section you’ll find that you can authorize who downloads, prints, blogs, and searches your photos from Flickr. In my case I have opted to:

Taking myself and my communications with Flickr out of the equation… this is a known problem. Other application developers have become acutely aware of the problem of leveraging Flickr’s API while respecting the copyrights of photographers and the licensing terms they specify. As recently as March 2008 this very topic has been discussed in the Flickr API discussion forum (API usage and image copyright …).

When you read this previously noted thread you begin to enter the realm of finger pointing. Ask a photographer who they blame when their image is published inappropriately through a 3rd party application using Flickr’s API and they’ll blame the developer. Ask the developer in this situation and they’ll blame the photographer for making their photographs available. In fact most developers quite logically will state that photographers should turn off their Privacy & Permissions setting to make their photographs available through public searches. Unfortunately that only removes photographs from tag searches, but not searches across pools or sets. On the other hand the counter argument is, “Why should a photographer turn off the ability of their photographs to be searched because a developer isn’t capable of programming the proper logic to display photographs with the proper licensing restrictions?”

What both parties have missed to date is that Flickr is ultimately responsible to honor their agreement with individual photographers and to manage their API in such a fashion that the Privacy & Permissions settings specified by Flickr photographers are honored. I am personally disappointed that Heather Champ did not pursue looking into this in a more timely fashion.Â  I have gone above and beyond in giving her an opportunity to address my concerns privately through several email correspondences and a personal conversation. Seven months is a lifetime in this day and age of blogging on the Internet. That being said I don’t let developers off the hook either when it comes to responsibility of releasing applications using Flickrs’ API. Although Flickr has ultimate responsibility in managing their API and subscribers, developers have the responsibility to understand the law and not break it. When a photographer uploads photographs to Flickr they’re not signing away their rights to their work for 3rd party developers to do what they will with them.

If you’re a photographer who uses Flickr I would encourage you not to wait 7 months as I have before publicly talking about this. The only way Flickr is going to address and/or fix this problem is by Flickr members letting them know this situation is unacceptable.