While at the Google+ Photographer’s Conference this past Tuesday and Wednesday I had the great fortune of being able to try the prototype of Google Glasses from Project Glass. These glasses provide a heads up display of sorts and also include a built in camera allowing you to capture some amazing photos and videos with a perspective that really hasn’t existed to date. So what were they like?

Trying out the Google Glasses prototype

They weren’t too heavy and they were very easy to wear. Considering what is packed into this small form factor it’s tough to believe how much functionality you actually get out of them. They include a camera, a heads-up screen to review photos and review augmented reality data tied to what you’re seeing and where you are (this later part was not seen nor tested). Unfortunately for me I’m left-eye dominant and the glasses were for a right-eye dominant person. For this reason to really see much I had to wince, closing my left eye.

Much of the recent news about them center on how bad they look, but they could be far worse and given the prospect of what information and value they provide it may be a small price to pay. Clearly given the Google+ Photographer’s Conference was centered around photography much of the discussion about them focused on their photographic and video potential. The Google Glasses photo examples shown during the presentation showed off the unique perspective they provide. Having both of the photographers hands in the scene is one noticeable difference between what is produced with the glasses versus a standard camera, but it is ultimately the point of view perspective (head height, looking down, around and with a wide field of view) that makes them stand out. 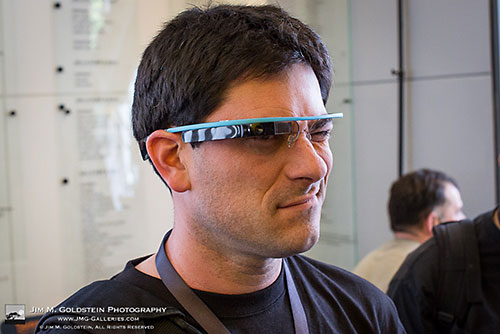 The resolution of the images, types of sensor used and the manner in which the photos are downloaded wasn’t discussed, but  to be honest the technical details were easily lost in the moment. It was a very overwhelming moment to see this technology at the prototype stage. It’s so radically different that it takes your breath away when you see it and handle it. As you handle the glasses you’re overwhelmed with the feeling that you’re holding the future in your hands. It’s very sci-fi feeling.

When I originally read the news about them I was skeptical, but after trying them on for a short test drive I think they could be great. The one thing that would be weird though is if everyone is wearing them and you’re taking pictures of each other you’ll have the glasses on versus having a more natural glass free presentation of your subjects. As a one-off it’s cool, but if everyone is running around with them on I’m not sure if people will really want the people photos they’d produce. Who knows. I’d rather deal with that dilemma and reap the rewards they provide than not.

Bonus photo provided of Peter Hurley in amazement as he learns about Google Glass from Dr. Marc Levoy. Note Peter was kind enough to take the photos of me wearing the glasses. 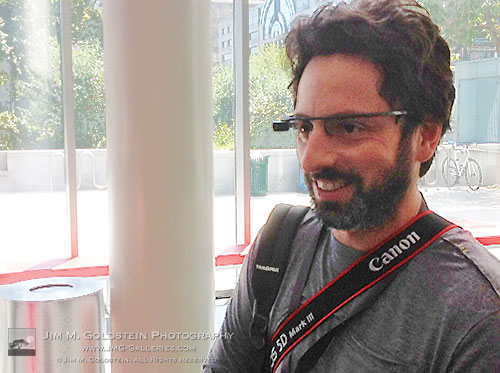 Sergey Brin wearing his Google Glasses at the Googe+ Photographer's Conference in San Francisco on May 23, 2012