Seeing that it’s the end of the year I thought I would review my web site metrics and share some trends I’ve noticed regarding mobile usage. Note tomorrow I’ll review some interesting social media trends.

Ever since the iPhone was introduced in 2007 I’ve been keeping an eye on how my web site has been viewed. As mobile operating systems have evolved introducing real web browsers (real in the sense that they closely resemble computer based browsers) I’ve been anticipating that there would be a shift in browsing platforms from computers to mobile devices. There really wasn’t a question of whether it would happen, but when and how fast. 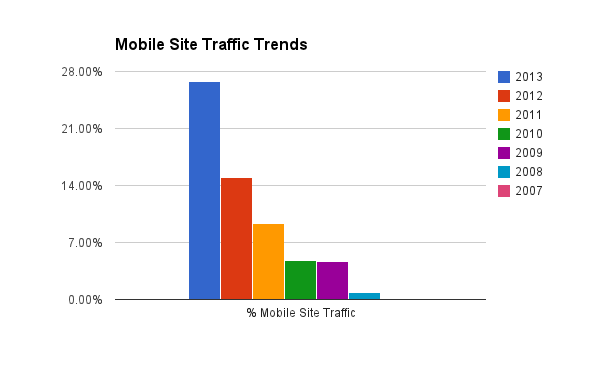 This year appears to be noteworthy in that over a 1/4 of my site traffic now comes from visitors on mobile devices (cell phones, tablet computers, etc.). Above is a graph showing the percentage of my web site traffic coming from mobile devices. In short, nearly every year since 2007 traffic from mobile devices has doubled. If this trend holds true then next year could be the first year my site traffic is split between mobile devices and computers.  Earlier in the year I realized I needed to adjust my site design to better accommodate mobile devices and implemented a responsive web template. Doing so could have helped sway the numbers, but I think whether my new web template went into effect or not I’d have seen this type of jump.  Will 2014 be the year that mobile viewing takes over? We’ll see.

How did your web site fare with mobile traffic?

About the Author
Jim Goldstein is a professional photographer and author, based out of the San Francisco bay area in California, who specializes in outdoor and nature photography. Passionate about nature and the environment Jim infuses elements of the natural world into his commercial, editorial and fine art work. For more follow Jim on Google+ | Twitter | Facebook | Instagram | Subscribe
Social Share
2 Comments
Copyright © JMG-Galleries – Jim M. Goldstein Photography, All Rights Reserved