It’s official 6 days ago I entered the world of the iPhone. Since that time, being the photography obsessed individual that I am, I’ve been interested in learning more about the capabilities of the iPhone’s camera. The camera on the iPhone continues to be the step child of the iPhone hype hardly getting any technical mention on Apple’s iPhone Technical Specifications page and it was hardly mentioned nor demonstrated by Steve Jobs during his keynote speech at MacWorld 2007. To sum up all that we know about the iPhone camera: “2.0 megapixels”.

Out of the Camera Quality and Comparison
One of the biggest surprises is the iPhones output of RAW files and iPhoto’s RAW processing capabilities. Just kidding! Don’t you wish. Sadly the only file output from the Apple iPhone is a JPEG file. At 2 megapixels the file dimension of each image is 1600 x 1200 pixels equivalent to the resolution of my first digital camera that I received as a gift in 1998. Just for the record my 1998 digital camera was still more money than the iPhone although I’ve not done my homework on the adjusted cost with inflation.

Resolution wise the camera output is adequate and would easily create a 4×6 or 6×4 image depending on your preference. Out of the camera the images are far from what they should be. Every camera does it’s best to reflect accurate color, but the iPhone seems to consistently produce images that need considerable tweaking. iPhoto, Apple’s software solution to catalog, store and adjust imported images, is a great resource, but frankly it is not enough. Why?

Frankly the old adage of “Garbage In, Garbage Out” is why. I’m sure with a decent quality image iPhoto could hold it’s own against the like of basic editing in Adobe Elements or Photoshop, but if you have a poor quality image file there isn’t much you can do.

Pictured below is my dog Moe at Fort Funston, an off leash dog area, here in San Francisco. On the left is the image as it appears straight out of the camera and to the right is Photoshop corrected version. The first thing you’ll notice is a heavy shift towards red in the center of the image. Secondly you’ll see a green color shift on the bottom corners. Before I go further with my review I should ground this review by saying, “It’s just a cell phone camera.” I wouldn’t expect the output to be on par with a more expensive digital camera like my dSLR, but for all that Apple represents I would expect the inner workings of the iPhone’s camera to be a little higher quality.

Grain and Noise
Below is an image before and after adjustment in Photoshop along with a 1:1 crop. Again you’ll notice the color shifts and vignetting (darkening of the corners), but what you’ll also see in the 1:1 crop is the luminance noise (the grainy pixelated look) and chrominance noise (the colored pixels sprinkled throughout the image). There is even very subtle moire in the image. All in all this was worse than I would have expected.

Clean Up In Photoshop
For the most part, looking past the afore mentioned weaknesses, a quick photo from the iPhone cleans up well enough for basic use. Even in an unedited version it is more than adequate for a quick image based email to a friend (which the iPhone supports with its email applications).

Focal Distance
As I tinkered with the iPhone I wanted to see how it fared with extreme focal distances. Would it take a decent picture of a flower? Would it take a decent picture of something far off in the distance? The iPhone camera does not have a Macro function and it is pretty apparent. Long distance shots come out ok when viewed in a smaller format, but the 1:1 crop reveals a less than stellar image. After two separate outings this past weekend to Fort Funston and Angel Island I had plenty of material to look through for examples of image quality at different focal lengths. Quickly seeing the limitations of the camera I decided to look into this in a more analytical fashion. Back at home I simply placed the camera at different heights above a dollar bill and snapped away (see below). In the end you wouldn’t want to photograph anything closer than 18 inches away and a distance of 24 inches seemed to be the ideal minimum focal distance.

Camera Aberrations
One last item of note about the iPhone camera is that panning produces an interesting result that I’ve yet to see with any other camera (not that I’ve tried with many). The resulting image from a pan will produce a “house of mirrors” type distortion. I discovered this while trying to get a photo of my very stubborn wife who goes out of her way to avoid having her picture taken. You can only imagine how well we get a long when I have a camera in hand 🙂 The result was a pleasant surprise, but for some it might be an annoyance. 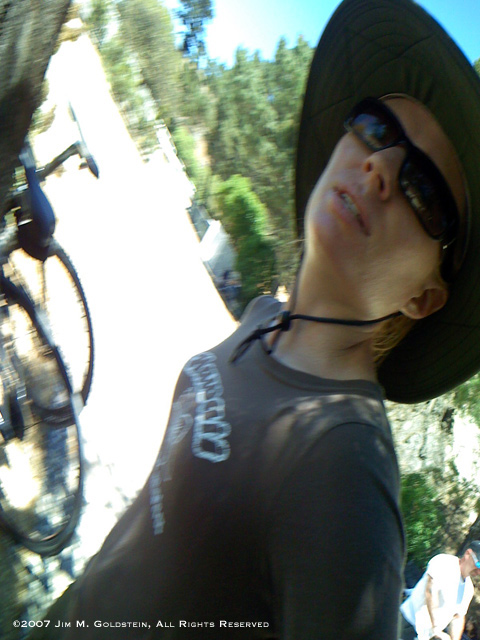 1. There is a shutter delay. Being spoiled with my dSLR this annoys the hell out of me, but over time you do get used to it.

2. Self portraits are nearly impossible to take with the iPhone. Whether you know it or not most phones that sport a camera have a little convex mirror on the back near the camera lens. This allows you to line yourself up in a self portrait shot. The iPhone does not have this and the layout of the shutter button on the iPhone screen makes it nearly impossible to take a self portrait shot. It’s unfortunate. Considering the sophistication of the software powering the iPhone it would have been nice if Apple included a timed shot function to counter balance the poor shutter button placement.

Overall Impressions
I wouldn’t rate the iPhone camera very highly and at best I’d consider it average. Not what I would have expected from Apple, but then again it’s an iPhone not an iCamera. It’s pretty apparent the camera wasn’t the focal point of the iPhone. The quality of the phone and iPod music/video player are far superior. For all the attention to detail put into the iPhone I would have expected more in regard to the camera. It works fine for quick images to relay in an email, but I’ll likely never print any of the images captured by the iPhone.